The ankle joint is formed by the bones of the lower leg (tibia and fibula) and the talus.  The foot is made up of 28 bones including the talus, calcaneus, tarsals, metatarsals, phalanges that make up the toes, and 2 sesamoids that lie near the bottom of the big toe. This is the only region of the body in contact with the ground during normal gait so it obviously plays a vital role in functional movement.  The ankle and foot also support your entire body weight which can contribute to injuries and pain here.

Muscles and joints of the ankle and foot can be common sources of pain (see Muscle & Joint Pain page).  In addition to those, here are some other conditions that physical therapy can help you with:

Plantar Fasciitis – The plantar fascia is a thick, web-like band of fibrous tissue that spans the bottom of the foot.  It plays an important role of stabilizing the arch of the foot so that it doesn’t collapse when you put weight through it.  Overuse, especially combined with muscle imbalances and joint stiffness in the lower leg, ankle, and foot lead to added stress on the plantar fascia.  As a result it breaks down and becomes inflamed.  The most common site of plantar fascia pain is at its attachment on the heel.  Occasionally, a bone spur can develop on the heel due to repetitive pulling by the plantar fascia where it attaches on the medial calcaneal tubercle.  People with flat feet (pes planus) or high arches (pes cavus) may be at increased risk for developing this problem.

Achilles tendonitis – The Achilles tendon is a large tendon in the back of the lower leg than connects the calf muscles to the heel.  Tendinitis (acute) or tendinosis (chronic) results in overuse, muscle imbalances, stiff joints, and faulty mechanics.  Individuals with this problem generally experience pain along the tendon and/or directly on the back of the heel making it difficult to walk or run.  Another type of Achilles injury involves an Achilles tendon rupture where the tendon tears apart.  This is a traumatic injury which most commonly occurs with a quick, forceful movement such as sprinting, jumping, or cutting.  Often times a “pop” sound accompanies an Achilles tear as well as a feeling as if someone kicked you in the back of the leg.

Posterior tibial tendinitis – The posterior tibailis muscle is located in the back/inside of the lower leg and it’s tendon extends down into the foot.  Its functional job is to help support the arch of the foot during gait.  Certain foot types such as flat feet (pes planus) may increase your risk of developing this problem.  Individuals with this problem complain of pain on the inside of the ankle and foot.  It is possible for this tendon to rupture from quick jumping or sprinting activities.

Peroneal tendinitis – The peroneal muscles run along the outside of the lower leg and pass into the side and bottom of the foot.  Like the other conditions mentioned this problem develops from a combination of overuse, muscle imbalances, ankle & foot stiffness, and faulty mechanics.  Pain along this tendon is felt on the outside of the ankle and foot.

Shin Splints – Also referred to as medial tibial stress syndrome or tibial periostitis this condition presents as pain in the middle to lower part of the tibia (shin bone).  This is a common complaint in runners and generally has to do with poor running form, improper footwear, and/or inadequate training.

Exertional Compartment Syndrome – The lower leg consist of 4 compartments which are separated by fascial tissue. This relatively rare problem occurs when the pressure in one of the compartments increases to an unsafe level resulting in lower leg or shin pain, foot pain, and sometimes numbness and weakness of the foot. Runner’s who develop this problem often report a “floppy foot” during their runs because they have difficulty controlling their foot when it hits the ground.  Another name for this problem is called Exercise-Induced Compartment Syndrome.  The anterior compartment in the front of the leg is the most commonly involved of the 4 compartments.

Bunions – A bunion is an abnormal bump that forms in the foot at the base of the big toe.  Foot type, footwear, daily activities, and faulty mechanics can all contribute to the development of a bunion.  Bunion’s are not always painful but if they are it can make walking and wearing certain types of shoes very difficult. A Tailor’s bunion, sometimes called a bunionette, is a bump on the other side of the foot at the base of the pinky toe. 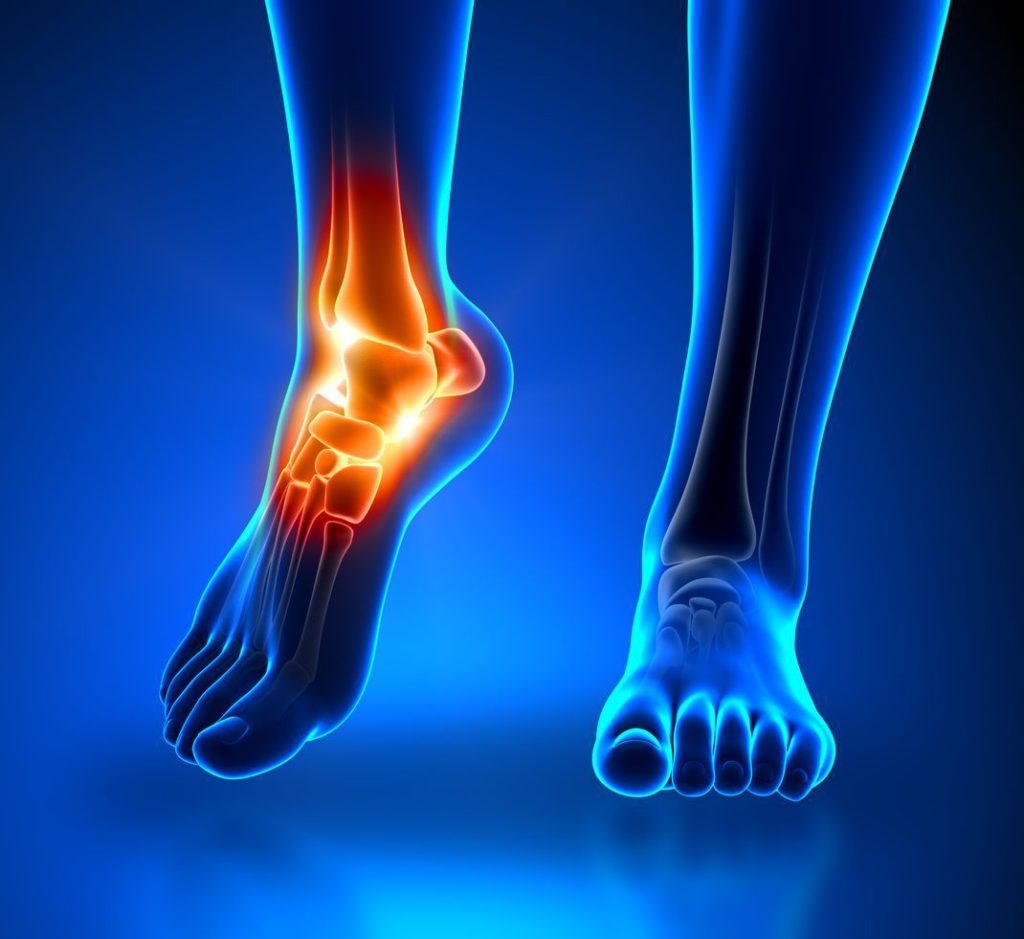 Our experts will help with your Ankle & Foot pain

Muscle & Joint Physical Therapy (MJPT) is an independent clinic focused on the treatment of orthopedic, spine, and sports-related injuries.